Well, not quite Thank You 2012 as thanking a year is a somewhat abstract concept, but a big thank you to everyone who has helped make p/hop a success in 2012.

Jane Lithgow took the p/hop reins in July and while she’s having a well-deserved festive holiday I thought I’d pop back to reflect on 2012.

While I’ve had less time for p/hop I still appreciate all the free time or the hard-earned cash people give up to help people less fortunate have access to healthcare.

So, what’s happened this year?

December 2011 had been pretty busy with p/hop’s birthday competition so we had a fairly quiet month organising behind the scenes for upcoming yarn shows and preparing new patterns.

We did have a beautiful new pattern, Ermintrude Mitts donated by Helena Cullum, which I like so much I made a pair for my MIL this Christmas.

The versatile and intriguing  Minerva Cowl pattern, knitted in a moebius loop, was donated by Anna Richardson.

We had an unusual request for knitted items, premature baby hats for our maternity clinics. Within days of asking for them tiny hats arrived at the MSF office. MSF also released a report on Mother’s Day about reducing maternal mortality. It is incredible the difference a small amount of money can make to keeping women safe in pregnancy and childbirth.

The generous people behind Sheepfold donated their Felted Crochet Bowl pattern, a great beginners project if you’ve just taken up the hook or a quick and easy way to use up leftover yarn if you’re a more experienced crocheter.

Natalie, p-hop founder, and I went to the Just Giving Awards, this time as judges, where we rubbed shoulders with the likes of Joanna Lumley and Jane appeared on the big screen!

A piece of knitting history was donated to p/hop. The Sheep Sweater, designed by Muir and Osborne, worn by Princess Diana and other 80’s icons, arrived at p/hop!

Pete, who helped get p/hop up and running left MSF and tried on a tiny hat.

In June we went to Wimbledon, with Ros Clarke’s Wimbledon socks, perfect for the summer tennis season.

We were inundated with  over 500 tiny hats which have gone to MSF maternity clinics overseas.

The lovely Stitch London organised a World Wide Knit in Public day picnic on the South Bank in London which included a raffle for MSF which raised a whopping £301. 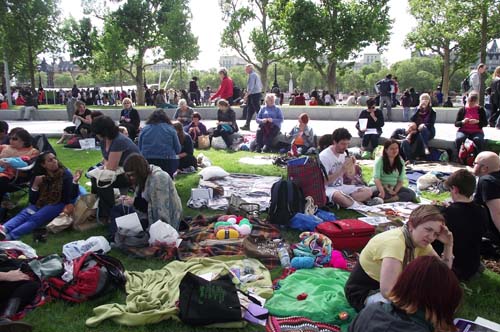 A huge refugee crisis was hitting South Sudan but wasn’t getting much media coverage. Knitters, however, are beyond just responding to mainstream news and on hearing water shortages were affecting people in refugee camps, knitter (and designer) Ros Clarke came up with the brilliant idea of p/H2O. Pennies per sip of water.

Back in the UK we took p/hop on the road to Woolfest and Fibre East festivals, both of which were soggy (by soggy I mean landslides, floods, and mud, lots of mud) but loads of fun. As always our patterns were a hit and generous fibre fans donated over £1,200 over the two shows. We’re still finding mud in places it shouldn’t be! Nothing compared with living in a refugee camp though.

You may have noticed there was a rather large sporting event in the summer of 2012. The Ravellenic Games. From Sock Put to WIP wrestling to Shawl Sailing our team knitted their, ahem, socks off, including some knitters who were volunteering as Gamesmakers in that other event.
Even Teeny Tiny Teddy took a trip to the Olympic park. We had a rest after the Olympics.

Jane took p/hop on the road again, this time to the thankfully dry and mud-free Glasgow School of Yarn. The event is held in the beautiful Rennie Mackintosh church where super knitters – including artisan dyers who came up with the excellent  idea of lucky dip bags for p/hop – raised a fantastic £770.

Rachel Atkinson aka Knittingtastic donated her clever, quick to knit and delightful to wear Riviera Scarf pattern to p/hop. I’ve seen several of these being sported in Nice where I am currently moored with my yacht around that London. Tres de rigeur, n’est pas?

The fabulous people at The Yarn Cake in Glasgow held a yarn swap raising £394.63 for p/hop. Marvellous!

We rounded off the year with a festive pattern. Rudolph proved to be a hit, there are already 19 on Ravelry and I’m sure there are more out in the wild, maybe pulling a certain sleigh?

Let’s not forget the ongoing yarn ‘hopping’ that happens on Ravelry. Do you have some unwanted stash? Just offer it up in our Ravelry group and another fibre-fan is likely to claim it in return for a donation to p/hop. Simples!

There’s also a yarn-swap being set up on Ravelry to reinvigorate your stash for the New Year.

Sadly poverty wasn’t eradicated in 2012 so there is still a great need to fundraise for MSF’s life-saving work. As always if you have enjoyed our patterns or you are inspired by MSF’s work it is easy to make a donation using the links on the right.

Please let us know what you enjoyed with p/hop in 2012, be it a pattern, meeting us at a show or something completely different, in the comments below.